The Philippines joins the world tomorrow, June 30, 2012, in Social Media Day which is a worldwide event spearheaded by Mashable.com celebrating a generation connected by social networks and social tools through the Internet and around the world.

In the Philippines which has about 27 million Facebook users, several key cities would take part in the celebration including Makati, Quezon City, Cebu, Davao, Iligan, and Cagayan De Oro. We’re not known as the ‘social media capital’ of the world for nothing.

First in the radar to organize the event is the one from Makati by TweetUp Manila. With the theme “Twitterati, bloggers, and world wide web,” everyone is invited to this free event on June 30 that starts 4pm at the Tower One Fountain Area, Ayala Triangle, Ayala Avenue, Makati City as social media influencers, bloggers, and industry players converge.

“Through several campaigns on popular social networks such as Facebook, Twitter, Instagram, and Foursquare, Smart will show the world why Filipinos are the best when it comes to social media,” said Smart Broadband Internet and Data Services Head Lloyd Manaloto in their website. 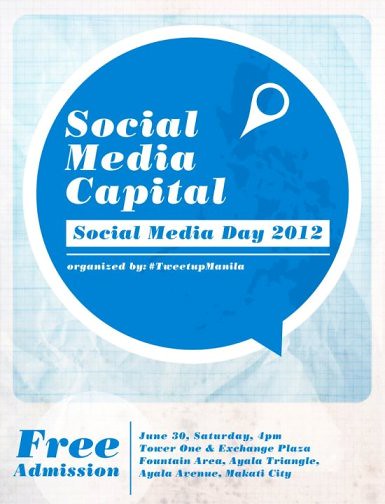 An hour or two after the gathering in Makati, we move to Quezon City where there will be a networking night for social media citizens, bloggers, and digital personalities at 7pm happening in Tea 101 located at Scout Bayoran corner Tomas Morato Extension, Brgy. Laging Handa, Quezon City. It aims to provide an appropriate venue for the community to mingle and meet-up offline, which can support better camaraderie afterwards through various social media and digital platforms. 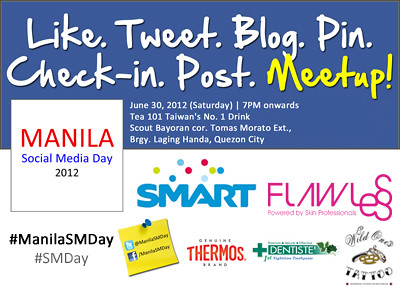 See you in Makati and Quezon City, in that order, tomorrow! So where will you be on Social Media Day 2012?