When I first heard about a mobile phone application called “iButterfly,” I wasn’t really sure what was it and what does a butterfly have anything to do with malls. Out of curiosity I tried it, and realized how fun and interesting it could be. 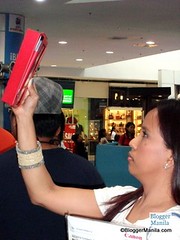 It was in the early morning of May 5, 2012 when SM invited some media to cover the SM iButterfly launch held at The Block in SM North Edsa.

The program was led by host Raymond Gutierrez and fashion stylist Liz Uy. A myriad of other celebrities and high profile bloggers we know today were also present including Laureen Uy, Pia Magalona, Elmo Magalona, Maxene Magalona and her siblings. Even YouTube hit Bogart ‘The Explorer” was there!

It was a really a star-studded morning with the likes of the General Luna rock band and DJ Vinimal who prepped up the crowd that early. Not missing in the celebratory launch were word games with the audience, ‘Pass the Message’, and ‘Name that Tune’, among others. Of course, prizes such as laptops and gadgets were given away. 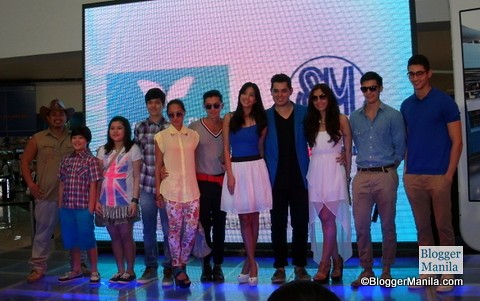 Thanks to SM Cyberzone, to SM Supermalls who organized the event, SM North EDSA as venue sponsor, and to the food sponsors  Kenny Rogers, Krispy Kreme, Red Ribbon, and others. It was also held in conjunction with the World Bloggers Day 2012 as shared by blogger Azrael Coladilla.

Now, let’s go to the nitty-gritty of this mobile application called ‘iButterfly.’ It is an application for iOS and Android OS enabled phones where you can catch a virtual butterfly called iButterfly using your smartphone and the technology of Augmented Reality. In layman’s term, the butterflies are not really there but the application ‘makes‘ it to appear to be so.

Now what makes it really interesting in the added concept of getting rewarded for your efforts of ‘catching‘ the iButterflies! Now who wouldn’t want that – to get some prizes while having fun in the comfort of the mall!

Each iButterfly is marked with freebie items in different levels and prizes according to the type of iButterfly you are able to catch.

Technology and A Little History

Aside from augmented reality, the iButterfly also uses motion sensors of the smartphone to catch and store it inside the phones. This proprietary platform truly engages customers thru a fun, interactive, and rewarding way. In this medium, the malls and different brands can reward, interact, conduct promotions and create a unique experience from SM.

Currently, it is also being used in Japan, Hongkong, Indonesia, and Singapore. It was previously created by Japan’s Mobile Art Lab and the rest is history.

Check out this awesome video about iButterfly:

Interested as I am, I already downloaded the iButterfly application in advance. Using my iPad, I went to http://smibutterfly.com/ where the three useful buttons can easily be found – the Download, Catch, and Redeem buttons. 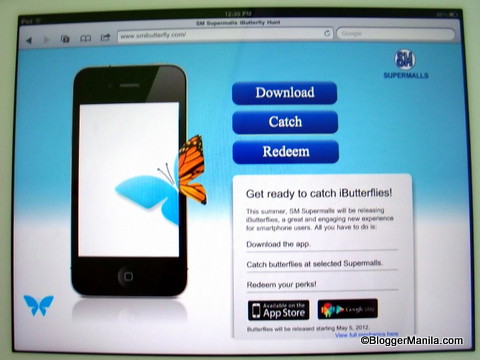 Upon pressing the download button, you would easily be led to the application page where you can download it for free! 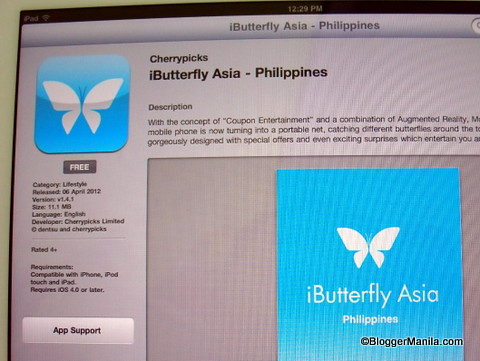 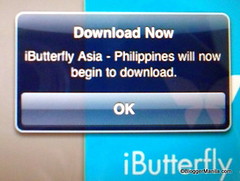 After choosing to download it, a button asking you to verify through the “Download Now” “Ok” button will prompt the process until you are ready to launch the software.

If you’re using an Android phone, you can download it from Google Play.

If you’re having problems in the download sites, you can go directly to these links:
http://itunes.apple.com/app/id514894083 (iOS)
https://play.google.com/store/apps/details?id=ph.com.cherrypicks.iButterfly (Android) 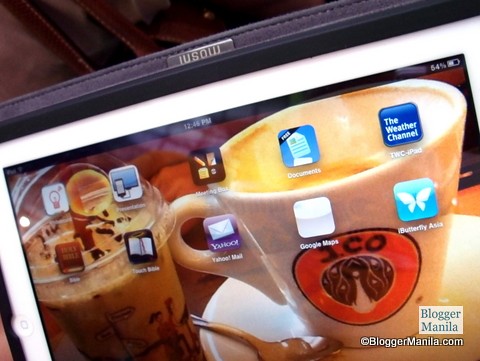 iButterfly App on my iPad 2

The iButterfly uses GPS for the location and number of their virtual butterflies. Hence you would be asked “‘‘iButterfly Asia‘” would like to use your current location.” Make sure to press “ok” here. Other notifications and verifications would also be asked from you.

And immediately after, you would be shown a map of the SM Mall where you are located. In my case, we were at SM North Edsa. Amazing isn’t it? 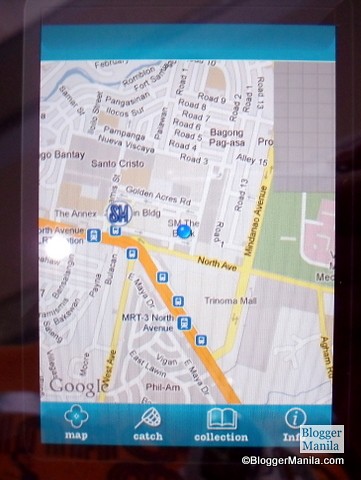 SM North EDSA on the Map!

Below the map, you would see 4 major buttons you would most often use (left to right): the Map, Catch, Collection, and Info.

You are currently on the ‘Map‘ part. To start playing the application, you press on the “Catch” button.

This would initiate your activity of scanning your mobile device, be it a smartphone of a tablet, around the mall area. In a short while or a few seconds, you would see colorful butterflies fluffing their wings around through augmented reality technology

The “Info” button is like your help guide or assistant in case you need assistance in language, how to use, and sharing in Facebook or Bluetooth. 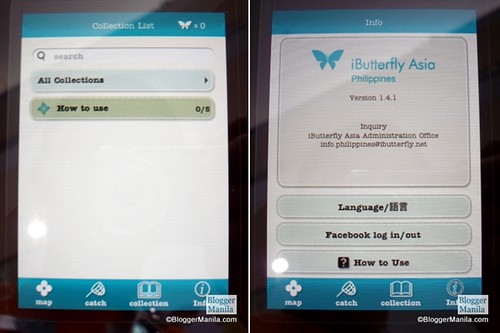 Start the Fun – My Experience

And so it was! In less than 5 seconds after pressing the “Catch” button, I immediately found an iButterfly with the BDO brand and caught it! 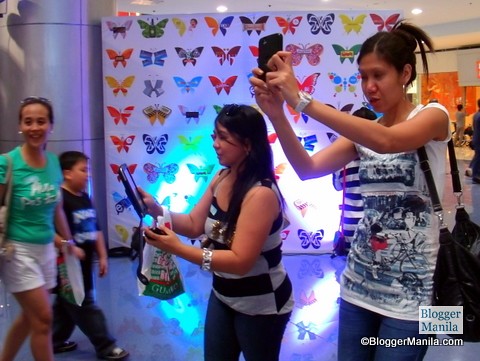 Participants eager to catch some iButterflies! 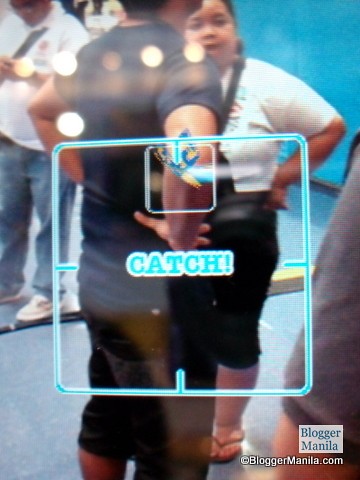 It turned out to be a BDO eBanking Info iButterfly with a date and time of catch indicated. I checked my Collection List and indeed, it was there! Awesome!

I continued on and found more iButterflies, this time more colorful and in more variants.

I learned that establishments which joined the iButterfly promo are: 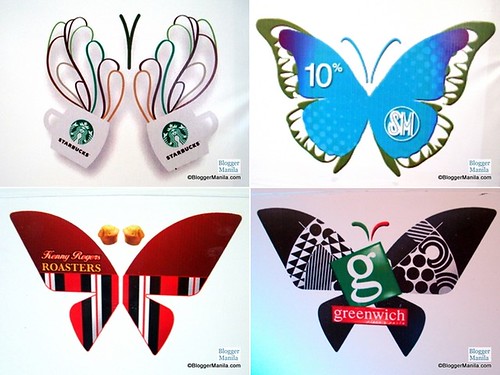 Check out the list of special iButterflies whose value you can redeem at the participating outlets here: http://smibutterfly.com/redeem.html 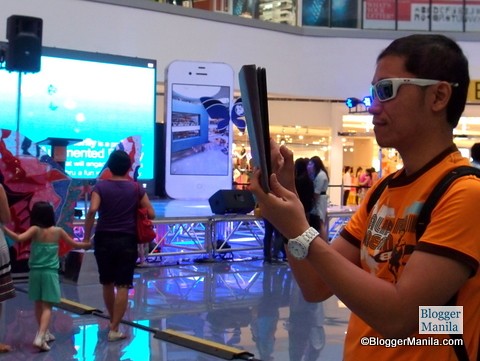 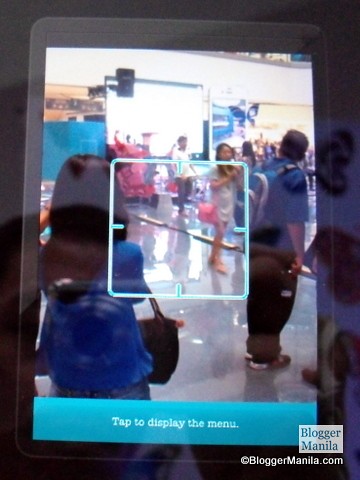 The second iButterfly I caught was an BDO ATM Debit Card / Cash Card iButterfly. Upon getting the card and making a P1000 purchase, I can get a chance to get free 2.25L Coke, SM Cinema Tickets, or P1000 worth of grocery items. And all these while enjoying the iButterfly application just like a game! 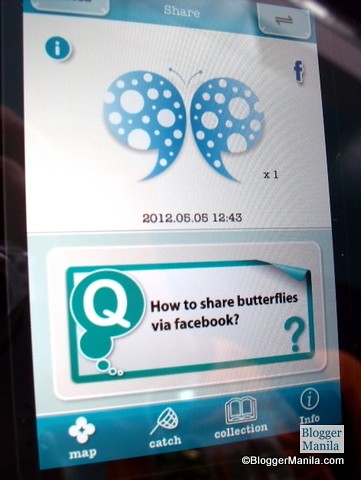 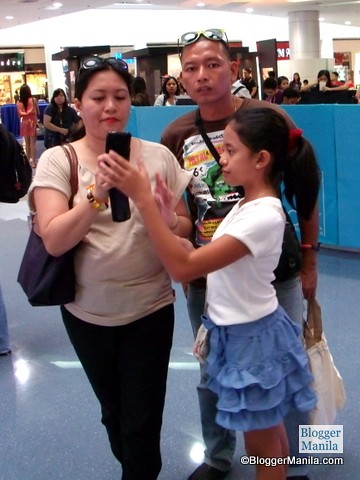 The family can also play iButterfly together! 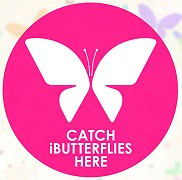 Here they are again in 3 steps:

The Most Special Butterfly

Together with other media guests and fellow bloggers, we went further around the block and some establishments hoping to catch more variants of iButterflies and hoping for the ones with bigger prizes.

I ended up with about 20 butterflies in 7 variants. Check out my Collection List: 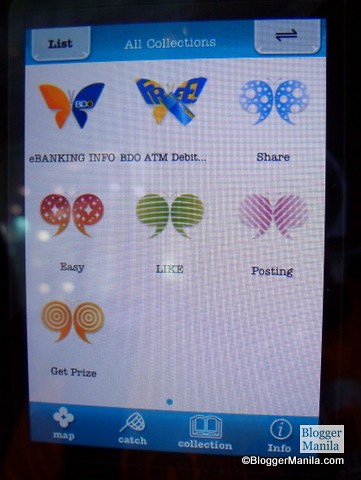 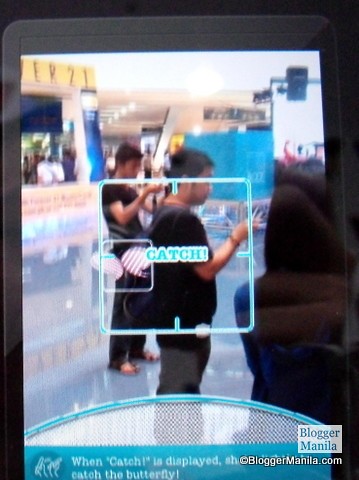 It was exciting and fun, and most importantly, I caught the butterflies with my special someone and we truly enjoyed and bonded together catching SM iButterflies that morning. I may have caught the most special butterfly of my life after all. 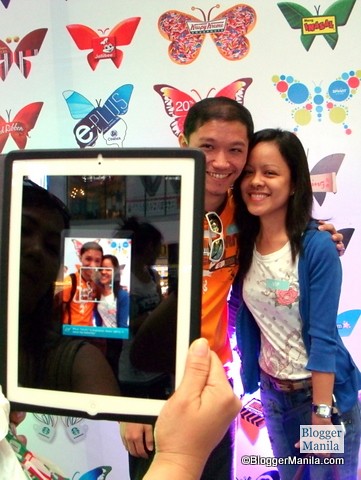 Join in the fun, download the iButterfly application if you haven’t. The SM Supermalls iButterfly Hunt will continue until June 30, 2012. Check out http://smibutterfly.com/mechanics.html for more details on this.